by Saul Rubin, Santa Monica NEXT

The death of the printed book—you know, those bound volumes of static pages that you have to manually flip through to read—has been foretold for years.

But like some creature from gothic literature, printed books refuse to die. And now a four-year-old grass-roots campaign to promote the joy of reading has shown just how hard it’s going to be to make the printed book go away for good.

The book-loving promotion is known as the Little Free Library. It began as a Wisconsin man’s humble tribute to his school teacher mother, but has now become a fast-growing worldwide movement.

Todd Bol built a replica one-room schoolhouse in his front yard, filled it with books, and invited anyone to stop by and take one. The effort took root in 2010, and now there are more than 15,000 little libraries around the world, including many on the Westside and Santa Monica. 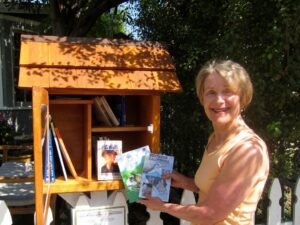 Judith Desjardins poses with books in front of her Little Free Library on Pearl Street in Santa Monica. She opened the tiny, free community library in January. (Photo by Saul Rubin)

The libraries are usually located in front yards or public spaces. They are often homemade wooden structures with two or three shelves and big enough to hold between two and three dozen books. Signs on the boxes let visitors know they can either take a book or leave one.
Next Sponsor

When Sunset Park holistic therapist Judith Desjardins heard about the concept, she knew she had to make one for her neighborhood. Her front yard, located at the intersection of 20th and Pearl Streets, is an attractive space with flowers, statues and benches.

“I am always out here and always interacting with people, so this was right up my alley,” she said.

A handyman helped her construct the redwood box with a shingled roof and place it in her yard easily accessible from the sidewalk by reaching over a white picket fence. Desjardins said that even before the library was finished, people were walking by and dropping off books.

“They got into the concept right away,” she said.

A secondary mission of the Little Free Library movement is to build a sense of community, an aspect of the project that Desjardins has seen happen in her neighborhood. Lots of people stop by to ask her how the project is going, or to comment on her garden, or to drop off books.

Desjardins initially stocked the library with an assortment of books for all ages. Now, she says, she relies on others to keep it full.

“It will go from really full of books to almost empty, and I’ll resist the temptation to go in and fix it. And then I look in the next day and it’s stocked full of books again,” she says.

According to a map of Little Free Libraries worldwide, there are at least four of them in Santa Monica, and many more on the Westside. 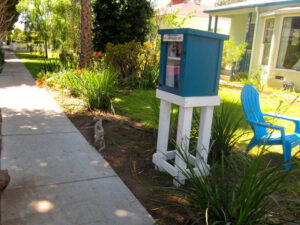 One of four Little Free Libraries in Santa Monica on Grant Street in Santa Monica. Community members are encouraged to take a book, or leave one behind. (Photo by Saul Rubin)

The group encourages people who build them to register them for a small fee in order to receive an official Little Free Library charter number and sign.

The website is also filled with information on how to participate, including instructions on how to build a little library, what to do about vandalism, or how to deal with pesky zoning administrators who might try to stop people from building them.

The group offers kits for a small fee to get people started, but many opt to build their own in a creative fashion. Photos of operators posed next to their little libraries are included in the group’s Flickr page.

The group’s initial goal was to have 2,510 libraries built by last year, a target the group’s founders say was the total number of libraries supported by Andrew Carnegie in the early 20th century. That goal was reached in August of 2012, and the numbers have continued to rise.

But the group’s mission is not really about how many little libraries are built. On the group’s website, blog and Facebook page, thousands of people involved in the project actively exchange tips on how to promote reading and the love of the basic book, that simple object with printed pages that refuses to fade away.

Saul Rubin is a professional journalist, travel author and media professor who has worked in Sana Monica for a quarter of a century. Saul was a reporter for the Santa Monica Outlook before helping to found the Santa Monica Lookout. He is currently the senior journalism professor at Santa Monica College where he teaches introductory news writing and multimedia story production. He is also the advisor to the student media operation, The Corsair.

Our Journey with Prostate Cancer:

Creating a Healthy Life and Marriage: