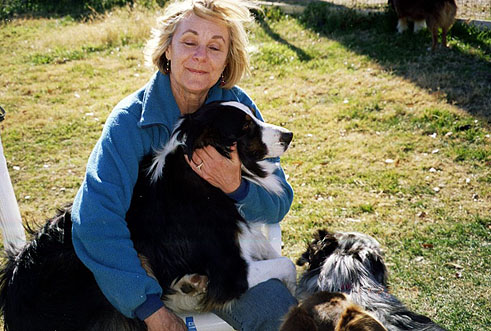 Eleven years ago, my husband, our cat, and I moved into our beautiful new house.  Having lived in an apartment for many years, I was thrilled to finally have a big, safe backyard for him.

Five days after we moved in, our beloved fifteen-year-old cat died.  Apparently, he had hung onto life long enough to get me installed in our new home.  He wanted to help me make the transition.

Both my husband and I were absolutely, completely devastated and entered an eight-month period of grieving.  I sobbed for hours on end and started each day with an awareness of a cloud of depression that I would have to push away, in order to complete the simplest of actions.

My heart was broken and I thought it would never heal.  At the six month mark, we started thinking about adopting a pet.  My body and psyche could not tolerate the thought of adopting a cat.  I couldn’t even pick up a cat.

Two months later, we began thinking about getting a dog.  A dog had never been an option when I lived in my apartment.  Now that we had a big house and a lovely yard, we could move forward with that plan.

Considering all the dog breeds, we decided that the right dog for us would be an Australian Shepherd.  They are beautiful, very intelligent, active dogs who love to be close to their family.  They are mid-size; not too small, not too large.  Just the right size for us.  Because I run my private holistic psychotherapy practice in my home, we decided that we wanted a dog who was about one year old; finished with the potty training and chewing- everything–in- sight stage.

We researched on-line and found “Southern California Aussie Rescue. ”  One of their criteria for adoption is that the potential adoptive family must pass a home inspection.  Aussies are herding dogs, so space and a big yard are important, as well as the temperament and lifestyle of the adoptive parents.  Aussies need parents who are physically active and who will provide stimulation for their active minds.  Aussie like to have work and jobs to do. In addition, Aussies are often referred to as “velcro” dogs; they typically bond closest to one of the parents and never leave that parent’s side.

Happily, we passed the home inspection and were approved for adoption.  The next step was to visit the Southern California Aussie Rescue website and search for our dog.  This task was almost overwhelming.  There were so many dogs to choose from; located all around California.  “How are we going to find our dog?”  We looked for weeks and weeks.  Every dog had a photo and description of their personality and energy level.  We knew we wanted a “medium energy” dog.  We looked and looked, but no dog stood out for us.

I became discouraged and pessimistic and nearly gave up the search.  We looked at so many photos and no dog tugged at our hearts.  I prayed for God to help us. Then one day it happened.  Independently, on two different computers, my husband and I saw the same photo and both of us exclaimed, “That’s our dog!”  His name at the time was “Brutus,” he was a year-and-half old, and he was living in a foster home near Palmdale.  We both fell in love with his smiling face and sensed that he was meant to be ours.

We called the foster mother and made plans to meet him.  As we walked up to the side fence, a pack of Aussies came running up.  I saw Brutie immediately and said to him, “I know you, and I’m going to be your mommy.”

That was quite a visit.  There were four Aussies running around, many cats, chickens and even a white horse.  We sat with the foster mother, Katie Clawson, exchanged questions, and watched the dogs playing with each other.  Brutie was friendly, active, and surprised me with a kiss.  Before I could even think about it, I scooped him into my arms and set him on my lap.  We bonded as mother and son at that moment.  A surge of love was released from my heart and poured through my body.  I felt alive and whole again.

When we left after our two hour visit, with plans to return the following Sunday, I told Brutie, “Mommy is coming back to get you.”

Our Journey with Prostate Cancer:

Creating a Healthy Life and Marriage: